In the land immediately around the manor there were once formal gardens. Remains of them are still preserved in the manor's private garden today where there is a surviving parterre or sunken garden (this is not publicly accessible). In the early years of the 18th century, formal planting was all the rage and neatly trimmed avenues of topiary were popular. Wealthy estates would have also had some exotic specimen trees to show off, brought back by plant hunters who travelled the world. These were spaced apart from one another so that visitors could walk all the way around and admire them. As the century went on the formality of this style went out of fashion and more natural planting styles came in. 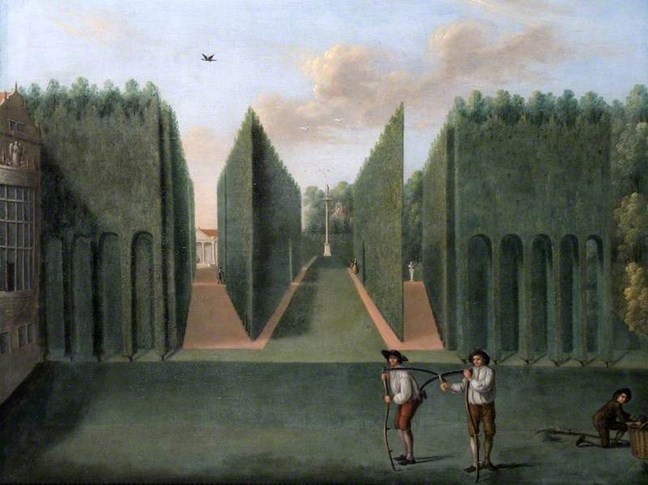 Note the formal topiary hedges at Hartwell Hall, near Aylesbury, and contemporary with Great Linford Manor.

Hidden deep inside the Wilderness area in the northwest of the park, ornamental garden buildings like the Doric Seat were popular in the gardens of the wealthiest families in 18th century England. In the days before the canal and railway, an open lawn would have led down from the Doric Seat to the River Ouse below. You can appreciate a similar view today from Stanton Low, by the children's play area.

We think that there may have been a matching Doric Seat at the neighbouring Little Linford Hall which once stood on the other side of the River Ouse. Catherine Uthwatt of Great Linford Manor married Matthew Knapp of Little Linford Hall in the mid-18th century. The story goes that the two Doric seats were for Catherine and her mother to gaze at one another across the valley.

Our Doric Seat survived until the 1980s when it was vandalised and destroyed by a fire. For a time in the 1960s it was home to some cows, as seen in the black and white photo below. In 2019 the ruins of the Doric Seat were excavated by a team from Cotswold Archaeology.

As part of our National Lottery Funded project, we have now reinterpreted the Doric Seat. It now survives as a knee-height brick seating area capped with slabs of local limestone. The classical style Doric columns, which give the seat its name, have been reinterpreted through a beautiful metal frame decorated with climbing plants motifs.Click here to find out more about the works at the Doric Seat. 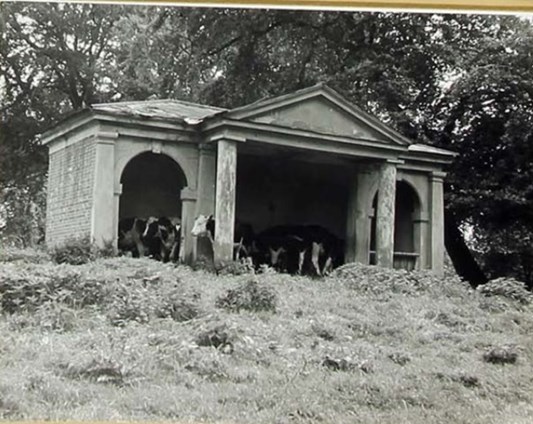 The Doric Seat is found in the Wilderness area of the park. A natural area such as this, thick with trees was popular in 18th century gardens and is even referenced in Jane Austen’s Pride and Prejudice when Lady Catherine de Bourgh visits Elizabeth Bennet at Longbourn:

Taking a turn around the Wilderness was a common pastime for friends, families and courting lovers. We have now installed meandering paths through the Wilderness and a set of Lime Leaf stepping stones as an interactive play sculpture. Click here to find out more about the works in the Wilderness. The Wilderness offers a shady retreat on a hot day as well as an enchanting stroll along the woodland path at the edge of the canal. 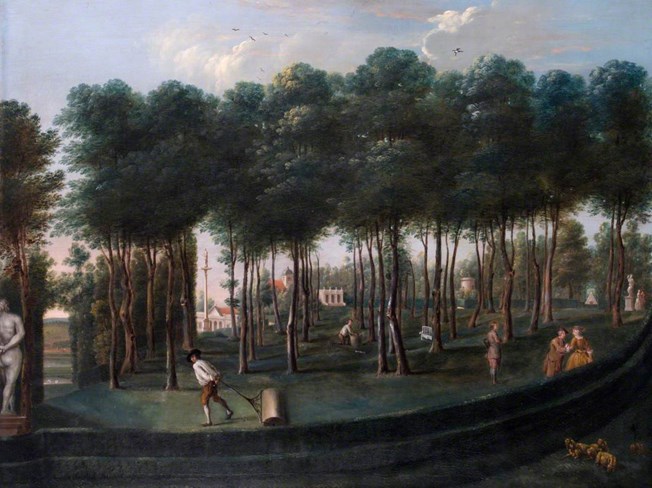 This painting by Nebot was commissioned to document the gardens at Hartwell House, near Aylesbury. Richard Woods is known to have worked on the gardens there. If Great Linford Manor's gardens were also created by Woods, they probably looked quite similar. Note the Ha-ha at the bottom of the painting, keeping the sheep out of the Wilderness. 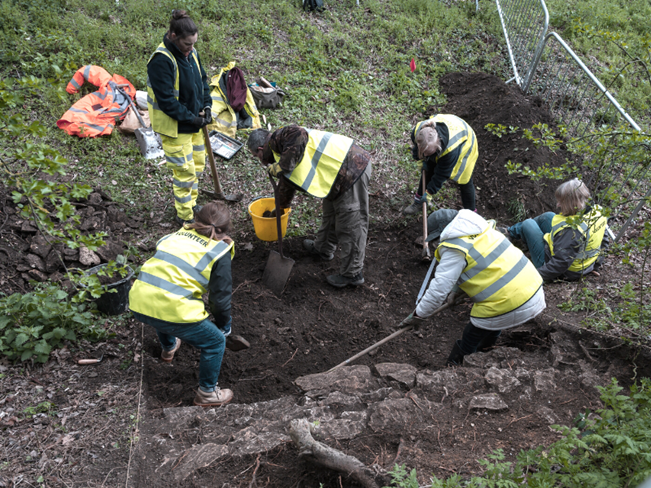 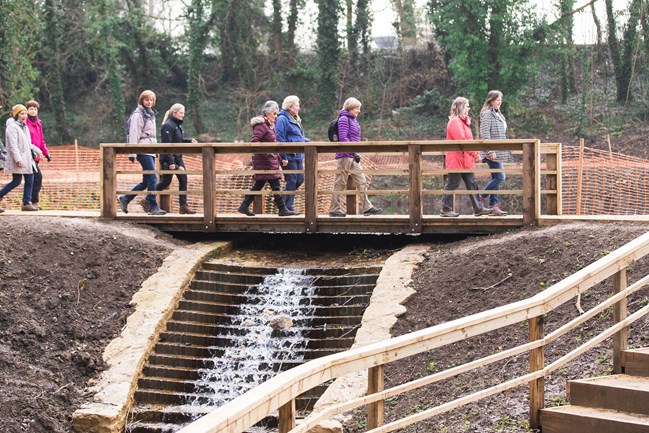 The restored Grand Cascade, located on the North side of the canal, off the Redway.

No 18th century garden would be complete without a water feature and one of the most popular options to movement and a sparkle to the water was a cascade. These devices were favoured by Capability Brown as seen at Blenheim Palace and Richard Woods' handiwork at Cusworth.

We think that once upon a time there were 4 ponds in the park, which had probably been converted from a medieval stream or fishponds. They were, and still are, fed from the natural Hine Spring outside the Almshouses, and water cascaded between them and down into the Ouse Valley beyond. In 1800 the Grand Union Canal was dug through the park, possibly destroying one pond and isolating another on the other side of the canal. In the 250 years since the gardens were laid out at Great Linford Manor, the ponds became silted up with tree debris and overcrowded by overhanging trees. Thanks to our National Lottery Heritage Fund grant, we have been able to remove many of the self-seeded trees, restore the stone walls around the ponds and dredge out the organic matter. The ponds are now a beautiful sight and water flows freely from the Hine Spring, through the Round Pond, into the Canal Pond, under the canal and into the Cascade Pond on the other side. Here it tumbles away under the Railway Walk redway and out to meet the River Ouse. 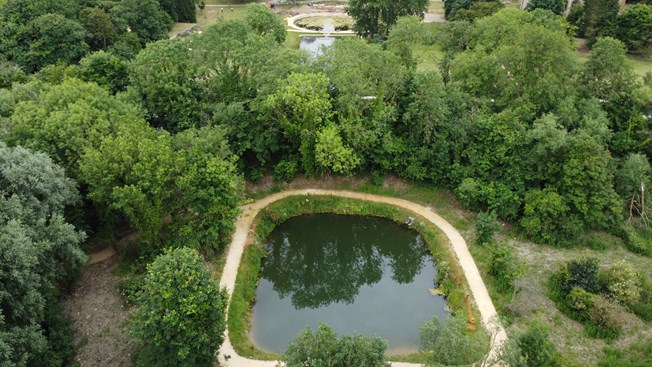 The three surviving ponds in alignment.

Our research has hinted that prolific 18th century landscape designer Richard Woods may be connected to the park. We know that he drew landscaping plans for the Little Linford estate, but we don't know how much of them were implemented. His design of the Little Linford estate is very similar to the existing features we see at Great Linford so perhaps Woods made designs for Great Linford too. The 18th century features surviving at Great Linford are mirrored at Woods' confirmed estates, for example cascades at Cannon Hall (South Yorkshire) and Audley End (Essex), Doric features at Audley End, and ha-ha ditches at sites like Cusworth Hall (South Yorkshire). 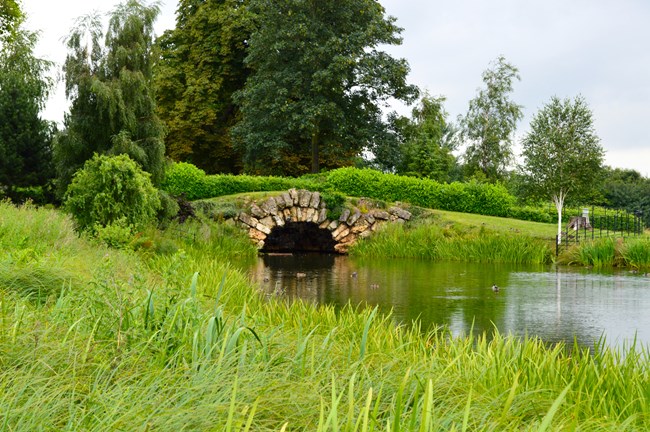 Richard Woods designed the landscape at the Cusworth Hall estate.

By the later 18th century, fashions were evolving, and informal, loosely planted styles referred to as English Landscape Style became popular. This was most likely the time when more natural features like the Wilderness were added.