The earthworks and buried remains at Old Wolverton lie around the green areas of Manor Farm Court and Holy Trinity Church in the Ouse Valley, and today you will often see sheep and cattle grazing here.  The Norman Motte and Bailey castle lies to the east of the church on the higher ground.  The deserted medieval village next to the castle survives as extensive earthworks within which roadways, boundaries and house outlines can be seen. This is such a special site that it has been listed as a Scheduled Ancient Monument and is protected by law. 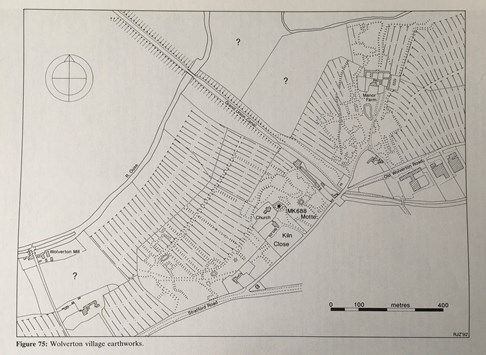 Image from Croft and Mynard, The Changing Landscape of Milton Keynes, 1993.

With thanks to the Buckinghamshire  Archaeological Society

The East of the Medieval Village

The early 19th century Manor Farm farmhouse is a rebuilding of an earlier 17th or 18th century house and it and its farm buildings are thought to be built on top of the remains of a medieval grange – a farm run by Monks. This particular grange was run by the Gilbertine Order. The ‘lay brothers’ of the order farmed the land, producing crops, raising livestock and possibly also producing beer to sell. This provided an income for their Priory at Clattercote in Oxfordshire.

Ownership transferred to another Priory (Chicksand, Beds.) before being sold to a London merchant in the 1300s. The land then became part of the Longville manor in the Tudor Period.

Archaeologists who excavated Milton Keynes believe it to be the best example of deserted village in Milton Keynes (Croft and Mynard). You can still see most of the street that ran from Wolverton Mill in the west to Manor Farm in the east. The numerous former quarry pits and well-defined crofts suggest the footings of the village were constructed of limestone. The peasant houses would probably have had a stone base and then been built up using wattle and daub.

To the east of the track, at least one croft is visible, while there you can identify five or more on the west. The oval pond is also believed to have been there at the time, providing water for livestock, and to its east is an open triangular area that may have been a village green. There is a sunken road to the back of the crofts, and signs of ridge and furrow – a land form that was created by traditional methods of ploughing (see below).

You can see more evidence of ridge and furrow in the fields to the back of the farm buildings, towards Floodplain Forest. Don’t be fooled by the dips in these fields. They are not earthworks of the village but were probably created by people quarrying for stone during and after the medieval period.

There is written evidence to suggest that a watermill (known as ‘Tirle Mill’) was still here in the 1700s, situated at the bottom the field (‘Grange Field’) to the north of Manor Farm. The river would have powered the mill, turning the large millstone to grind grain into flour. Although no trace of the mill buildings survives a fragment of gritstone millstone was found close to the site in 1979.

Built before the railway and the car, canals revolutionised transport, allowing heavy goods such as coal to be pulled by horses over water. This part of the Grand Union canal (then named the Grand Junction) was finished in 1800, linking Birmingham to London.

West of the Medieval Village

The Motte and Bailey Castle

You can still see the remnants of the early Norman castle. The motte is the mound of earth that is now surrounded by fencing to protect it. It measures 50 metres in diameter at its base, and 20 metres at the top. Although only 5 metres higher than the churchyard, it was 78 meters above sea level, and commanded a great view of the Ouse Valley below. This is where a wooden building would have been – the keep, the safest place in the castle. The bailey is at the base of the motte, an area of land that contained a few buildings and been protected by a wooden fence. You can just about trace the edges of the bailey which has been pockmarked by small quarry pits. Both the motte and bailey would have been surrounded by a ditch – the north side of the 6 metre ditch around the motte still exists (it now contains a limestone wall).

Why was a castle built here?

Castles were built for defence and as a sign of power. The manor (the land) of Wolverton was granted to Manno le Breton by William the Conqueror for his support after the invasion in 1066. This kept his best fighters onside and helped William to control the land. However, while many motte and bailey castles were built during this early period, it is believed that it was probably Manno’s son, Meinfelin or his grandson, Hamo, who built the castle at Wolverton, in the late 1000’s or early 1100’s. Most likely it was built during the Anarchy – a time of civil war when Stephen and Mathilda were fighting for the crown.

On this site, you can see the centre of the manor which would have had a manor house, demesne (the area of land around the manor house), the village street, a church (now replaced by the Victorian Holy Trinity), woodland for collecting firewood and timber for building, fields for farming and common land where peasants could graze animals and collect resources.

Archaeologists who excavated Milton Keynes believe it to be the best example of a deserted village in the New Town (Croft and Mynard). You can still see most of the street that ran from Wolverton Mill in the east to Manor Farm in the west (then known as the Grange). In the fields below Holy Trinity, the street runs under the more modern walled garden and houses and then emerges as a sunken track that bends towards Wolverton Mill. You can also make out the back lane that joins the main track. On either side of the street you can see the earthworks of farm crofts (small fenced areas that peasants would have used for growing extra vegetables or keeping animals), many of which have platforms where a peasant house would have stood. The sunken track and well-defined crofts suggest the footings of the village were constructed of limestone. The peasant houses would probably have had a stone base and then been built up using a timber frame or “cruck” with wattle and daub infill. Behind the back lane, there are banked areas surrounding ridge and furrow (created by years of ploughing). The Earth banks around these closes may have been banked to protect them from flooding

The manor house itself no longer exists. No records survive about the Norman manor and the manor built by the Longville family in the 16th century fell into disrepair and was demolished by the Radcliffe Trustees in 1725. This was thought to be south of the motte, north east of the driveway, in front of the rectory (Longueville Court). The rectory was built in 1730 using the stonework from the demolished house. If you look (discreetly) at the surround of the rectory door you can see part of the 16th century stonework.

After the invasion, William commissioned a “Great Survey” recorded in the Domesday Book (or, more accurately, books) to find out how much land and wealth he controlled, and to help him tax people in the future. This document tells us that the village was made up of 50 households in 1086, with an estimated population of 250. This is relatively large for the period - in the top 20% of settlements listed in the Domesday Book.

While we know little about the peasants who lived here, we know far more about the owners of the Manor - the Barons of Wolverton, as the descendants of Meinfelin were named after the 1200s. Sir Frank Markham, the eminent local historian, dismisses the family as ‘a feeble lot’ who achieved little. We cannot judge the accuracy of this statement as Markham appears to base this mainly on the lack of military achievement and production of legitimate heirs. However, the male line stopped before 1360 and a female descendent married John de Longville. The Longville family continued to hold the estate for centuries until the Radcliffe Trust acquired it in the 1700s. John Radcliffe had been a physician (doctor) to the monarchy and owned part of Stony Stratford, the manor here, and Stacey Hill Farm (where Milton Keynes Museum is today).

What happened to the village?

The village is thought to have been deserted by the 1580s. It is unclear whether plagues reduced village numbers – the Black Death in 1348 had led to the abandonment of many villages in England and plague continued to strike intermittently. Enclosure would certainly have had a role here. The Longville’s gradually fenced off land, including the common land that was often crucial to peasants’ survival. This could have been partly to rear sheep which was a very lucrative business in the Tudor period. The change to sheep farming also required fewer peasants, meaning that many lost their income and could not pay rent for their land holdings or were simply forced off the land by the Landlord. By the 17th Century, the Longvilles had enclosed the whole area to serve as a park for the manor, probably to breed deer for hunting. The fields that had once been a village were originally named - Lower Park and High Park.

Other sources of information on the site:

See the Historic England listing for these monuments

Domesday Book - See images of the records for Wolverton

Find out more about the earthworks