Hidden deep inside the wilderness area in the northwest of the park, a feature like this was popular in 18th century gardens. In the days before the canal and railway, an open lawn would have led down from the Doric Seat to the River Great Ouse below. We think that there may have been a matching Doric Seat at the neighbouring Little Linford Hall which once stood on the other side of the River Ouse. Catherine Uthwatt of Great Linford Manor married Matthew Knapp of Little Linford Hall in the mid-18th century. The story goes that the two Doric seats were for Catherine and her mother to gaze at one another across the valley.

Our Doric Seat survived until the 1980s when it was vandalised and destroyed by a fire. For a time in the 1960s it was home to some cows! In 2019 it was excavated by a team from Cotswold Archaeology. As part of our National Lottery Funded project, we are restoring part of the Doric seat and providing interpretation on site. 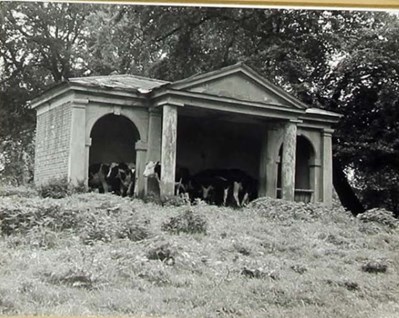 The Doric Seat is found in the wilderness area of the park. A natural area such as this, thick with trees was popular in 18th century gardens and is even referenced in Jane Austen’s Pride and Prejudice when Lady Catherine de Bourgh visits Elizabeth Bennet at Longbourn:

Taking a turn around the Wilderness was a common pastime for friends, families and courting lovers. We are bringing it back to life by reinstating its meandering paths as part of our National Lottery project. 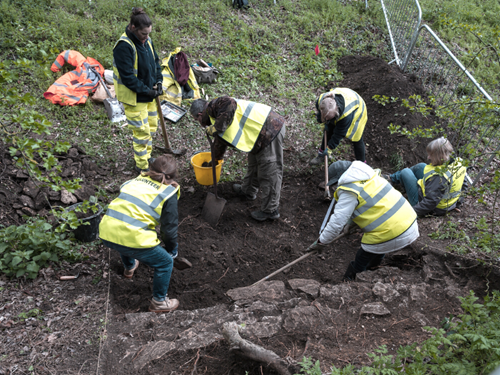 No 18th century garden would be complete without a water feature. We think that once upon a time there were 4 ponds in the park, which had probably been converted from a medieval stream or fishponds. They were, and still are, fed from the natural Hine Spring outside the Almshouses, and water cascaded between them and down into the Ouse Valley beyond. In 1800 the Grand Union Canal was dug through the park, possibly destroying one pond and isolating another on the other side of the canal. Over time the ponds have become full of debris and water no longer flows between them. As part of our project we are restoring the ponds so that water can cascade down them again.

Our research has hinted that prolific 18th century landscape designer Richard Woods may be connected to the park. We know that he drew landscaping plans for the Little Linford estate, but we don't know how much of them were implemented. His design of the Little Linford estate is very similar to the existing features we see at Great Linford so perhaps Woods made designs for Great Linford too.

By the late 18th century fashions had evolved, and informal, loosely planted styles referred to as English Landscape Style became popular. This was most likely the time when more natural features like the wilderness were added.

Check out our blog section for more information on history in the parks!