Our Annual Public Meeting was a great success!

We saw a record 230 people attend the Annual Public Meeting last Thursday evening (23rd June). There were several special guests in attendance including Countess Howe, Lord Lieutenant, Debbie Brock, the High Sheriff of Buckinghamshire, Pete Marland, Leader of MK Council, and John Duggan, founding chair of The Parks Trust. A packed agenda included formal thanks to our retiring Chief Executive, David Foster, who was recognised for his 19 years of dedicated service to our charity and the city of Milton Keynes.

Our recently appointed Chief Executive, Victoria Miles MBE, expressed her excitement of joining us at The Trust. She said, “Stewardship of much-loved local assets has been at the core of my work in previous roles and it is an honour to now lead the team that cares for the parks, lakes and landscapes of Milton Keynes.” 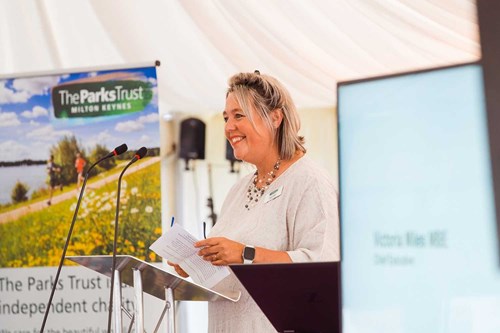 Our management team also answered several of the public's questions which covered topics such as sustainability, our use of glyphosate, grass cutting and litter management.

During the meeting, David also provided his last report on the financial year 2021-22 with key updates including: 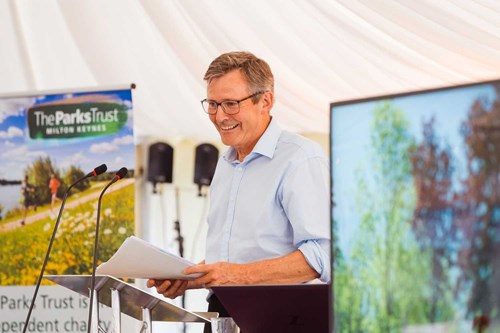 We ended the meeting with a special preview of our first ever TV commercial which can be seen live across Milton Keynes today!

Commenting on why the time was right for the advertising campaign, Hannah Bodley, our Head of Marketing, Events and Community Engagement said, “Our wide-ranging work is entirely funded by income we have to generate ourselves and touches the lives of every resident in the city. However, many people still don’t realise that it’s a charity caring for their green spaces, delivering outdoor learning to their schools and bringing the community together at over 500 events a year. Local TV advertising is now a more affordable channel and, as we enter our 30th birthday year, it offers a great way to increase awareness of the Trust.”

If you missed out on watching the Annual Public Meeting, watch it now on YouTube.