The return of our warblers in the spring is well underway! The arrival of these birds from Africa are less heralded than more celebrated migratory birds like swallow, swift and cuckoo. This is not surprising as warblers can be secretive birds, singing from deep within scrub or reed beds and they are often tricky to identify compared with more familiar songbirds in Milton Keynes. However, warblers are worth a bit of perseverance and can often be recognised by their attractive songs if not by their plumage!

The chiffchaff and willow warbler are two of the most closely related birds in the UK, both slender pale warblers with a hint of olive green. While the willow warbler has a pleasant, cascading song, the chiffchaff has an all too repetitive song consisting of just two notes. It calls ‘chiff-chaff’ (or, if you prefer chip-shop) from high up in trees, a cheerful but rather mundane sound of springtime. Chiffchaffs continue to do well locally and recently we are even getting annual visits from the rarer eastern race, the Siberian chiffchaff. By contrast, its close cousin, the willow warbler, is faring quite badly in Milton Keynes and across many parts of England, with approximately two thirds of our population lost since 1995. Nevertheless, the delightful willow warbler can still be heard singing in most local woods and parks, but it is usually just one or two males, whereas in the past there may have been as many as ten. It’s still not well understood to why these two closely related birds are showing mixed fortunes.

Cetti’s warbler on the other hand, is a great success story. Larger than most other species, it is nevertheless elusive as it generally nests in waterside scrub and sings deep in cover. Although, it has the distinction of being our loudest British songbird, with bursts of very loud song which to the ears may sound something like “chitty chitty bang bang”. Listen out for these birds at our lakes, particularly North Willen, Stony Stratford Nature Reserve, Furzton Lake, and Lodge Lake. 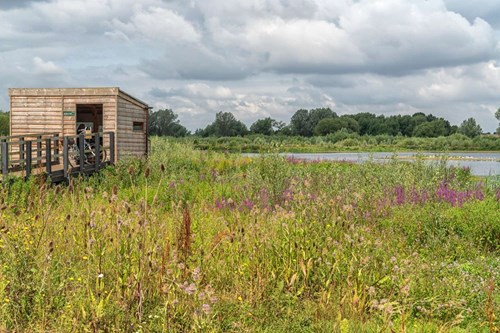 In June 2021, there was a lot of excitement amongst local birders as a pair of marsh warblers – one of the UK’s rarest songbirds – was found building a nest at Floodplain Forest Nature Reserve. In most years, fewer than 20 pairs nest in England and this bird is practically unknown in Milton Keynes and Bucks. We were lucky to see one pair, that carried food to the suspected nest site. But it is not known whether the warbler successfully fledged any young. We can only hope that this was not a one-off and that this very rare species reappears in the future. Senior Biodiversity Officer Martin Kincaid says:

“The breeding attempt by Marsh Warblers at Floodplain Forest shows just what is possible with the fantastic mosaic of habitats we have created at this location. The site attracts a good variety of summer migrant birds and is a reliable site for cuckoos and the more common warbler species as well as nesting wading birds such as little ringed plover”.

Let us know what birds you spot in the parks by tagging us @TheParksTrust on social media!