“Pass the Parcel was an idea to create a series of interconnected art works based on a mile (or so) of timber which was re-invented at different locations - a stack of building material with a sense of promise” Walter Jack, Artist

It was designed to reflect the development of the Eastern Expansion area in Milton Keynes. Originally located at the newly built Brooklands Farm Primary School as a Cathedral of 649 beams of English Oak, the piece was reformed into three features around Broughton Gate and Brooklands: Fallen Oak, Oak Store and Porte Cochère. 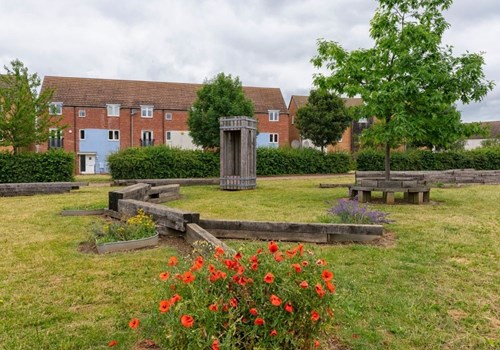 Fallen Oak was designed in response to the ideas and suggestions of the community who asked for artwork that offered the opportunity for rest or play for all ages. Walter Jack Studio created a series of pieces that are connected through a concept of a tree. It was placed here to connect with the ‘heritage route’ where pedestrians and road users can see it and use it as a landmark. 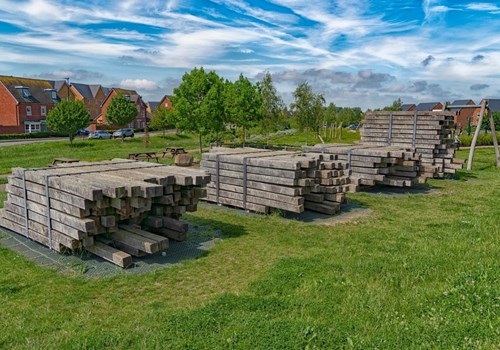 Oak Store was created as a social space, a place where young people can gather and explore. Walter Jack, the artist, intended there to be staircases and platforms, simple climbs and more challenging climbs, places to shelter, places for performance or space for being on your own. This piece was purposefully set within Brooklands Meadow play area to enable it to be incorporated into children’s play. 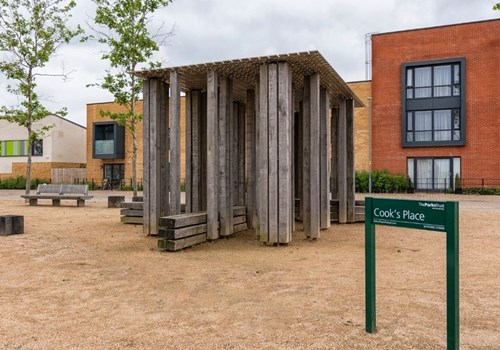 Porte Cochère was installed in 2018 at Cooks Place, providing a little civic grandeur as well as a place to meet. Walter Jack said the “spaces and seating are created for hanging out: the cornerstone of community!”. It also alludes to Milton Keynes’ famous architectural style, the Porte Cochère along Avebury, Midsummer and Silbury Boulevard in Central Milton Keynes.