Bancroft is one of the most fascinating archaeological landscapes in Milton Keynes. Known primarily for its Roman villa, archaeological digs have revealed almost continuous occupation from 800 BC.

Who was here before Roman rule?

Although stone tools found during excavations suggests activity during the Mesolithic and Neolithic periods (Middle and Late Stone Age), the earliest settlement found dated to the late Bronze Age/Early Iron Age. Settlers built a farmstead in the hilltop at Blue Bridge (the estate on the other side of Miller’s Way). The farmstead was centred on one of the largest round houses of this period discovered in the UK, measuring nearly 20 metres in diameter! You can see the rings of postholes in the photo from the excavations. 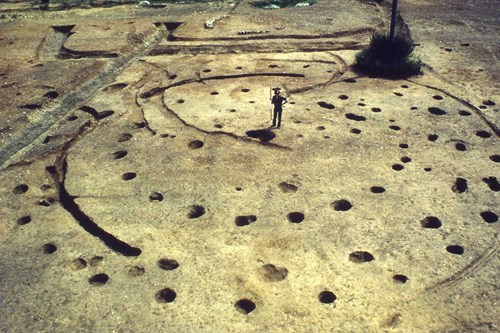 During the Middle Iron Age the large round house was replaced by 15 smaller ones. The village had shrunk by the Later Iron Age and it is during this period that there is clear evidence of farming at the site that later became Bancroft villa, with the creation of field boundaries.

When was the Roman Villa built?

Following the establishment of Roman rule in Southern England, the windswept hilltop farmstead at Blue Bridge was replaced by the first Bancroft villa in about AD 100. Bancroft was one of eight large farming estates in the city area, each centred around a Roman Villa – in Milton Keynes Village, Stantonbury, Wymbush, Walton, Dovecote Farm at Shenley Brook End, Bletchley’s Sherwood Drive and Holne Chase.

What is a Roman Villa?

A villa is a Roman farm – with a farmhouse and accompanying farm buildings.

The stones that you see on site mark out the farmhouse of the villa as it looked in AD 340. Although we refer to the house as a villa, by this stage the farm was no longer in use and the house was used more like a country mansion.

Below is a map of the main structures found on the site, charting how the villa changed over time. 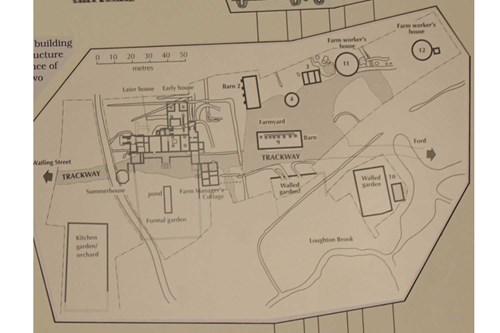 Image thanks to Buckinghamshire Archaeological Society, From Bancroft RJ Williams and RJ Zeepvat, 1994

The farm buildings and a large rectangular farm house, all constructed in stone and timber in the Roman style, were set around a cobbled yard. The interior of the farm house was very basic, with floors of beaten earth and undecorated walls. There were two rooms at the eastern end, and a corridor that led to a bath suite. This consisted of a stoke room, two heated rooms and a cold room with a rectangular plunge bath. The walls of the bath suite were decorated with paintings of sea creatures.

At this time, farming was the focus of the estate. Seven farm buildings have been discovered at Bancroft. All appear to have been built at the same time as the first house.

It is difficult to say what most of the farm buildings were used for. From their large size, Buildings 2
and 9 were probably barns. In Building 9, the roof was supported by a row of substantial posts, which probably also carried partitions for animal stalls in the west side of the building. Building 3 may have been a granary, with a raised floor to keep out rats, mice and moisture. Building 11, with its central hearth, was probably a farm labourer’s house, as was probably building 12, both placed at a discreet distance from the farmhouse.

To the east of the trackway was Building 10, a small but substantial structure with a cobbled floor and evidence of glazed windows. South of this were two walled enclosures, possibly vegetable gardens, close to the brook.

About AD180, the farm house was destroyed by fire. For the next hundred years or so the site appears to have been more or less abandoned. In about AD275 a new stone-built house was constructed, at right angles to the original house and partly overlying it. This new house measured 31 x 10 metres and was built using stone from the original farmhouse and farm buildings, with a tiled roof. Inside there were three main rooms, one with underfloor heating, and a bath suite at the south end of the house. Floors were mortar and painted red or black, and the walls were also brightly painted. There may have been an upper floor.

The main house was refurbished and extended. The bath house was rebuilt and enlarged, a corridor and two service rooms were added at the front, and a second bath suite was built at the rear. Mosaic floors, some of very high quality, were laid in nearly every room by craftsmen from as far away as Corinium (Cirencester). A walled garden was laid out in front, with a central fishpond and octagonal summer house or shrine (Building 5). A cottage, possibly for a farm manager, was also built nearby (Building 8). 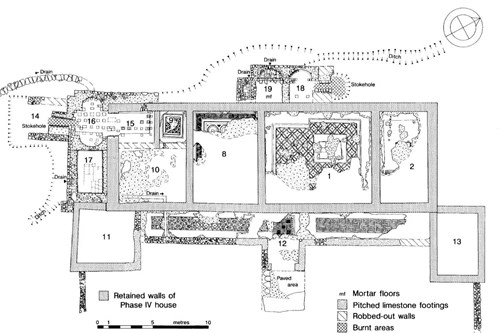 Apart from the bath suite, we cannot definitively say what the rooms were used for, but you can use the information to guess! Note that you are only seeing part of the building - it is very likely that the house was two story, and there was an extension at the back.

Who lived at Bancroft villa?

The original inhabitants of Bancroft villa were farmers who were almost certainly native Britons that had adopted Roman customs and dress. They may have been descendants of the Iron Age famers who lived on the nearby hilltop. The farmworkers would have been local to the area. Accommodation was at first provided for some of them close to the farm. It is possible that the villa was sold in the fourth century to a wealthy merchant, which would account for the scale of the rebuilding and the provision made for a farm manager.

When was the Mausoleum built? 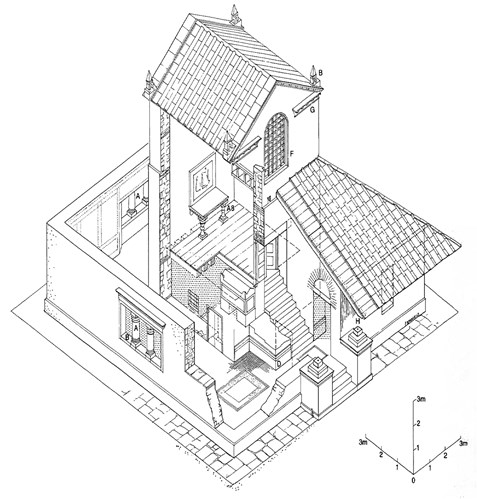 Near the Iron Age farmstead on the hilltop overlooking the villa was a small cremation cemetery, presumably used by its occupants. Each burial included pottery vessels containing offerings, and some also contained personal belongings, such as brooches and beads.

In the latter part of the first century, a large stone mausoleum (burial monument) was erected next to the hilltop cemetery. Its central stone tower would have been visible for miles. Within the tower at ground level was a single room, probably containing an altar. Below this, probably accessed by wooden stairs, was a square burial vault. On the concrete floor of the burial chamber were marks made by two sarcophagi (stone coffins). The tower was surrounded by an open verandah, with a porch that looked out over the valley. The building appears to have fallen out of use in the late second century AD, and much of the above-ground structure was demolished in the late third century, possibly to provide building material for the later villa. In the fourth century, a small circular shrine was built nearby.

What happened after the Roman period?

After AD 400, the towns that the villa would have relied on to sell and purchase their produce declined, due to plague and the general decline of the Roman empire. The villa would have been too expensive to maintain and was eventually been abandoned.

Nearly seven hundred years later, the ruins of the villa probably provided building material for the monks who built Bradwell Abbey. After the Abbey was dissolved in the sixteenth century, much of the stone was probably used locally. One of the walls at nearby Stacey Hill Farm (now Milton Keynes Museum) is believed to have been constructed out of this recycled stone.

When was the site discovered?

In 1967, a local man noticed fragments of Roman pottery in the bank at Loughton Brook, suggesting a settlement nearby. This was pinpointed four years later when fieldwalking by local archaeologists revealed pottery and tile on a large scale. Excavations during 1973-78 showed the site to be a Roman villa. In 1981, a second Roman site was discovered on the hilltop 300 metres from the villa, now Blue Bridge. Further excavations were carried out at the villa and mausoleum sites during 1983-85 providing us with a wealth of information about the site.

Are there any other Roman villas in MK?

Milton Keynes was intensely farmed during the Roman period. Within two kilometres of Bancroft, two villa sites (Stantonbury and Wymbush) and two native farmsteads (Abbey Hill Golf Course and one between Heelands and Bradwell Common) have been discovered. Sheep and cattle were reared, and wheat and oats were the favoured crops. These would have been traded at markets in the nearby Roman settlements of Lactodorum (Towcester) and Magiovinium (near Fenny Stratford).

Where can I find out more?

Milton Keynes is one of the most studied archaeological landscapes in the UK and there are lots of other heritage sites in The Parks Trust parks and elsewhere in the city. To find out more about this site, or the many others, look below.

Website links:
Other Heritage sites in The Parks Trust parks

Buckinghamshire Archaeological Society: In addition to talks and online information, they have also published detailed books and reports on the excavations http://www.bucksas.org.uk/

MK Museum - They have models of the area and now house many of the artefacts that were discovered on site, including most of the mosaics: http://www.miltonkeynesmuseum.org.uk/

Explore other heritage in our parks