At Great Linford you will find two Victorian brick kilns and the base of a third. These, as the name suggests, were large ovens for making bricks.  They were built in the late 1800s by a coal and lime merchant who lived in Newport Pagnell, George Osborn Price.

Where are the Brick Kilns?

If you follow the canal broadwalk from Great Linford Manor Park towards Campbell Park you will find the brick kilns. See Google Maps directions here or follow what3words location:///outlooks.nails.deeper.

Why were they built here?

Many brick kilns were built along this stretch of the canal from the mid-1800s. Milton Keynes is largely built on clay, so this area provided the material needed to make bricks (the two ponds on site are excavated clay pits). The kilns are right next to the canal because this allowed bricks to be transported to building projects in both directions, and also enabled coal to be brought to site. It was much easier and quicker for a horse to pull heavy loads by a boat on the water, than by a wagon along poorly surfaced track.

How were bricks made?

Two men dug the clay out in winter when the ground was more likely to be wet and, therefore, soft. The clay was then fed into a machine called a ‘pug’ which stirred and beat it, and then fed it out in a strip. The strip was laid out on an oiled table and a “cutter off” made six brick shapes by pulling down a frame holding six wires over the clay – rather like a cheese cutter.  The “green bricks”, which would still be wet and heavy, were then carted by the “runner away” to a series of duckboards where they were arranged by the “setter down” to dry. The stack was covered by a wooden roof or surrounded by straw or canvas to protect is from hot sun and rain.

After about a month, once the bricks had dried sufficiently, they were placed inside the kilns. Each kiln could hold 20-25,000 bricks! A fire was then lit, and the brick workers continued to stoke the fire for five days, using 122 tonnes of coal. The kilns would reach temperatures of 1,150 C, after which the fire was left to die out and the kiln would cool for a week.

The doors, now missing, were raised by pulley and the bricks were removed. They were then taken down to the wharf to boats that would have transported them to places such as Wolverton Cosgrove, Castlethorpe and New Bradwell. If you live in a local building that was created around the late 1800s or early 1900s, the bricks may have come from this Kiln! 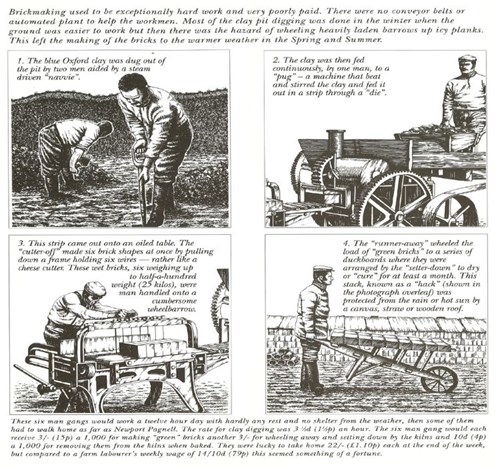 Why are there metal rings around the Kilns?

The iron bands around the kilns were crucial to holding the kilns together as the temperature rose – absorbing the stress from the expanding bricks.

What do we know about the people that worked here?

Brick making was exceptionally hard work and poorly paid. Records of the brickyard show that the workers were men who worked in gangs of six for 12 hours a day. They were paid 22 shillings per week - the equivalent of about £90 in terms of spending power at the time, meaning they were earning £1.50 per hour. We also know some of the names of the people who worked here: “Toddler” Mills, Jack Read (stoker), Bill Riley, “Dabber” Riley, “Boxer” Riley, “Hookey” Keech, Tommy Lacey (who kept the Wharf pub at Linford), Joe Malsher (engine driver), Jim Burnell and Albert Stonton.

When did the kilns stop being used?

The Brickyard was unable to compete with improved methods of production from other companies. Continuous firing and better ways of extracting clay were introduced that made it much more economical to transport bricks from Newton Longville Brickmaking sites by steam traction engine.

The Brick Kilns were restored in 1981 and are now under the care of The Parks Trust. We appointed specialist contractors to carry out the necessary repairs in 2021 so they are now structurally sound and preserved for future generations.

Can we get inside?

The Brick Kilns are not currently accessible to the public, but The Parks Trust may look to arranging guided walks in the future.

Why are there ponds here?

The two ponds in the park are water-filled clay pits and now support many aquatic plants and animals. The mounds on the far banks are the remains of the spoil heaps that have been colonised by hawthorn and willow.

Were there other brick kilns in what is now Milton Keynes?

There were many other brick kilns along the Grand Union Canal, including Fenny Stratford - Bragg’s Brick Yard c1850; Simpson - George Clarke’s Brickworks c1850; Great Woolstone – Bailey’s Brickyard c1830; Little Woolstone – Thomas Roger’s Brickyard c1840; Bradwell – Brickworks 1845. There were at least 17 other Brick Kilns in the MK area near the canal or Watling Street.

Explore other Heritage in our Parks